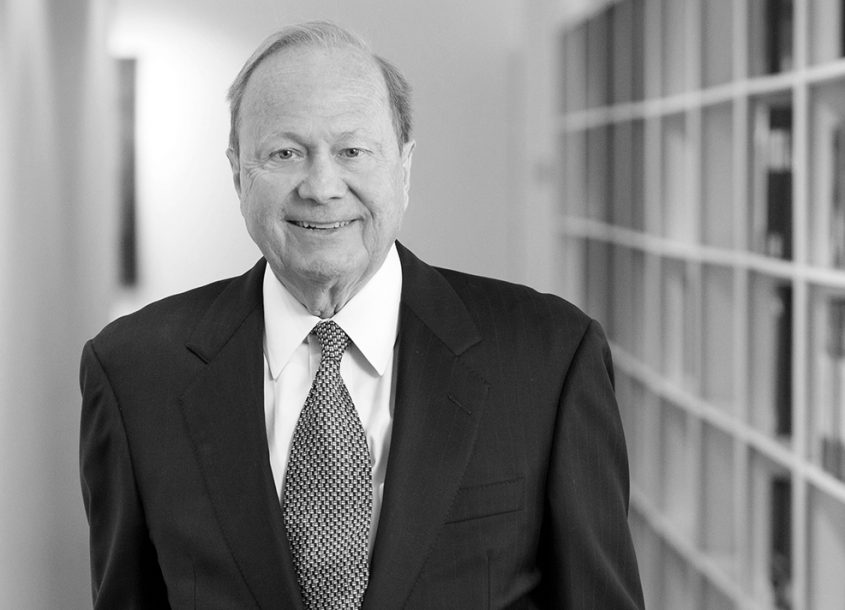 The TroyGould family mourns the loss of one of its name members, William D. Gould, who passed away August 6 of pneumonia at age 79 from complications due to Multiple Myeloma.

Bill was a pillar of the Los Angeles legal community. He was named by Best Lawyers in America as the “2012 Los Angeles Mergers and Acquisitions Law Lawyer of the Year.”  He was a rising star from the moment he arrived in 1986 from O’Melveny, where he had been the youngest-ever attorney on that firm’s management committee. Bill’s specialties included, among other things, advising boards of directors of public companies. He and other members of our Firm authored the book, “Advising and Defending Corporate Directors and Officers.”

“He was an enormously successful transactional lawyer and always the smartest person in the room, but his biggest weapon was his charm,” said TroyGould Managing Member Sandy Hillsberg. “He made everyone in the room feel good, and motivated them to work together toward a resolution.”

Bill’s enthusiasm and unbridled interest in helping and mentoring those around him made him a favorite of co-workers and clients alike.

“I was extremely fortunate to have Bill as my mentor and learned so much from him. He was the consummate optimist who made everyone feel important,” said Darren Freedman, a member of TroyGould’s Management Committee. “He had six kids and a wonderful wife, but somehow he also made everyone at TroyGould feel like his family. He made room for everybody.”

Bill, a Los Angeles native, graduated from Loyola High School, got his Bachelor’s from Loyola University of Los Angeles, and was first in his class and editor of the Law Review at University of California, Los Angeles School of Law (Graduated 1963). In anticipation of his future retirement, Bill had in recent years shifted more of the day-to-day work for his clients to other attorneys in the Firm and had focused on strategic matters for those clients as well as growth and development matters for the Firm.

Among his interests were horse racing, college basketball, international travel (especially to Panama), and music – so it was quite a thrill for him when his oldest son, Billy Gould, made it big as the bassist for Faith No More. Bill even traveled a bit with his son’s band when it toured internationally. Around the same time, Bill and a longtime friend, James Murphy of Jimmy’s Restaurant in Beverly Hills, partnered to produce a musical passion project of their own: “Chaplin: The Musical,” which reached Broadway in 2012.